René Jules Lalique joined Louis Aucoc in Paris at the age of sixteen as an apprentice goldsmith. His father had died just before and he was now the only man in the house. At the time, Lalique lived with his mother on the Rue Chapon in Paris, where his father was a household representative.

In 1878, when Lalique was eighteen, he longed to broaden his horizons and would then spend two years in London studying at a polytechnic for Art, Science and Literature (Sydenham College), based at the Crystal Palace. It was during this period that Lalique became acquainted with the Arts & Crafts movement.  This movement was a reaction to the 'formal pollution' of the industrial revolutions. On the one hand, these had ensured that a new elite within society could emerge that had acquired wealth not through family background (e.g. nobility) but through their own efforts, such as the industrialists and the higher bourgeoisie, but also for this previously mentioned 'deformation of form'.  The standard-bearers of this movement were John Ruskin and William Morris. The latter in particular was known for his sumptuous designs for fabrics and wallpaper designs. 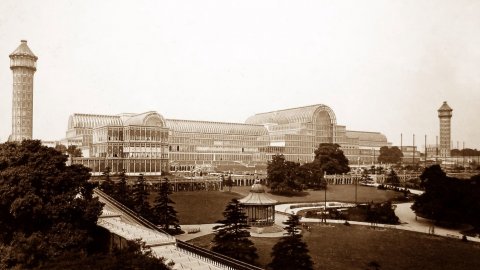 The 1854 Kanagawa Convention between the United States and Japan made trade possible again. This enabled the West to become acquainted with the naturalistic nature of Japanese art in general and its printmaking in particular.  Morris was very inspired by the naturalistic nature of this art. This is how the Art & Crafts movement came into being. This movement stood for 'craftsmanship' and 'honest craftsmanship' and that for ordinary people. But because handicraft is a time-consuming affair, this intention turned out to be a success from an artistic point of view, but a social flop. Lalique had absorbed this fact very well and would be able to incorporate it in a successful way later in his career.

After a two-year stay in London, Lalique returned to Paris where his talents were immediately noticed by the artistic leaders of major jewellery houses such as Boucheron, Jacta, Cartier and Henri Vever, with whom Lalique became very close friends. Vever had great admiration for Lalique and vice versa. Lalique's early designs do not yet bear his name, but the aura screams Lalique everywhere.

In 1884, Lalique was introduced by his mother, Olympe Berthélémy, to a lady who would later become René's wife. Her name was Marie-Louise Lambert. She was the daughter of Joseph Lambert and Jeanne Richenet. Because her father, Joseph, had already died at the time, Marie-Louise had a considerable amount of money at her disposal. Olympe felt that René should make use of this because it offered him a door to independence. Lambert's financial position enabled Lalique to take over the workshop with employees of Jules Destapes that was located at Place Gaillon. Although there was no real love between Lambert and Lalique, he called it his best decision ever. In 1887 Lalique officially married Lambert and in 1888 they had a daughter, Georgette. 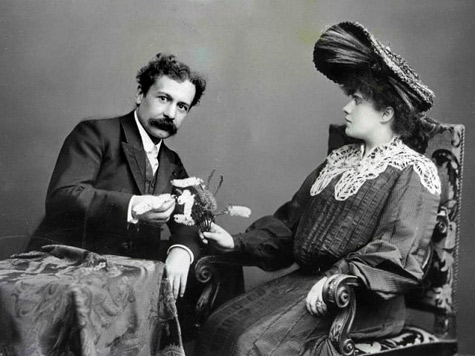 The marriage failed at the end of 1888 because Lalique already had another lady in mind. Her name was Alice Ledru with whom he would share his life from 1890 onwards. Alice and René moved to Rue Thérèse number 20 (Paris) and in 1892 they had a daughter named Suzanne. Because Lambert, to put it mildly, was not happy about the end of their marriage, the financial settlement between Lalique and Lambert would last until 1898. They were at war with each other.

After this protracted divorce, Lalique, in the same year, rents a glass facility in Clairefontaine, near Rambouillet, not far from Paris. There Lalique starts experimenting with glass with the help of his good friend Jean Ringel d'Illzach. In 1900, Alice and René had another son, Marc. In the same year, Lalique also exhibited his innovative jewellery designs at the 'Exposition Universelle' in Paris, with which he acquired the 'Medaille d'Or' and the connotation 'l'Inventeur du Bijou Moderne'. The innovative aspect of Lalique's jewellery lies in the fact that he replaces precious stones with glass or window enamel. In French this is called 'Plique-a-Jour'.

From jeweler to glassmaker

Success can no longer be slowed down and Lalique is in great financial wealth, enabling him to buy land on the Seine to build a house on. Construction was completed in 1902 (Cours la Reine 40) and the Lalique family moved in. René and Alice officially marry. From that year onwards, everything went quickly and Lalique took part in the 'Prima Esposizione Internazionale d'Arte Decorativa Moderna' in Turin. There, his good friend Calouste Gulbenkian, a British businessman of Armenian origin, buys Lalique's famous corsage 'Dame Libelulle'. This jewel does not only stand out because of its use of materials, but also because of its size, 26.5 x 23 cm. In this way Lalique comes to be known as the jewellery maker who creates mainly for 'beauty' and less for comfort.

In 1903 Lalique participates for the first time in the 'Salon d'Automne' and in 1904 in the 'St. Louis World Fair' (USA). Then, in 1905, Lalique opens his first boutique at Place-Vendôme number 24. Not long afterwards, perfumer François Coty settled at number 23, which would lead to a long collaboration. Lalique was still a jeweller, but from 1907 onwards he would supply Coty with designs for his perfume bottles. It would give a decisive boost to the perfume industry as we know it today; an overall design of a bottle, a perfume and a packaging. In 1908, Lalique supplied Coty with the first "L'Effleurt" bottle.  Lalique's contribution to the perfume industry is generally seen as the transition from jeweller to glassmaker. 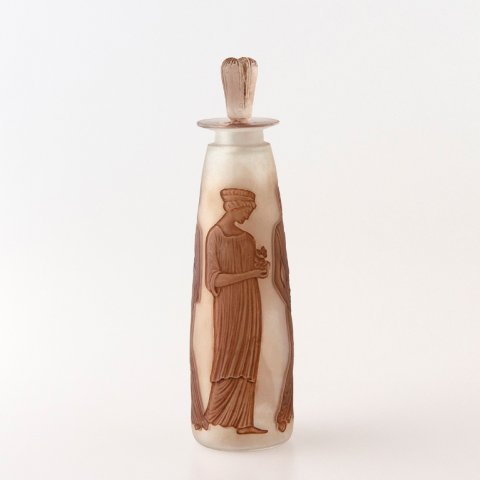 The death of his wife Alice in 1909 was a huge blow to René. For a moment it seemed as if he didn't want to go any further, but in the same year he decided to rent a larger facility in Combs-la-Ville, southwest of Paris. It is a building owned by the electricity company there and Lalique is converting it into a factory. In 1910 Lalique's daughter, Georgette, dies from his first marriage. The factory that Lalique rented from 1909 became his property in 1913. The transition from jewellery to glass is now a fact. Lalique would now be able to realise what was not possible from the point of view of the Art & Crafts period.

Lalique's jewellery is now expressed in the extremely high detailing and finishing in the moulds he made for blowing and pressing perfume bottles, vases and other works of art. The seams caused by the mould during blowing could easily be annealed after unloading under the influence of heating. And the traditionally time-consuming process of enamelling and fire painting was replaced by bitumen lacquering and patinating. These methods introduced by Lalique meant that industrially produced objects had the appearance of a handmade object. Something that had not been achieved during the Arts & Crafts period, Lalique had now created. Thus Lalique's dream fabric became a 'new industrial luxury'.

The First World War, like any type of war, threw a spanner in the works. Lalique was now forced to transform the activities within his facility from glass art production to medical glassware such as ampoules, vials and syringes. For just a handful of perfumers, Lalique continues to produce vials, like for Perfumes Arys. In 1920, Lalique establishes a relationship with one of his shop assistants, Marie-Jeanne Anère. Together they had two children, Raymond and Renée-Georgette, and moved from Paris to Chaville near Versailles. The studio is located in Paris at Cours la Reine.

Shortly afterwards, Lalique decided to open a new factory in 1921, as a result of the enormous demand for his designs. This factory stood and still stands in Wingen-sur-Moder, Alsace. It was the period of Art Deco that reached its climax in 1925 with the large 'Exposition Internationale des Arts Décoratifs et Industriels Modernes' in Paris, in which Lalique also participated. The art deco style takes its name from this exhibition. Lalique shines here in a large pavilion on the Cour des Métiers which is adorned by a fourteen-metre high fountain in the middle, designed by René himself. This fountain consists of 128 large glass statues of women from which 128 jets of water spray in the shape of a tiara. Illuminated from the inside, this fountain was a true light in the darkness at night. 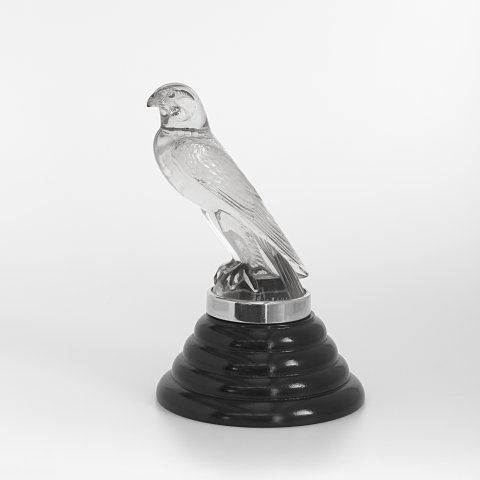 It is Lalique who presents glass in combination with light. A 'brilliant' example of this is the so-called 'Bouchon de Radiateur' which served as a mascot on the front of a car. The glass image lit up in the dark. Besides being an artist, Lalique turned out to be a true and great businessman. Even the stock market crash of 1929 did not get him down. Lalique focused on the group that does not suffer from economic decline, even during the downturn: the puissant rich. Lalique had previously been commissioned to design glass for the luxury ocean liners, but in 1934 he was to be given the hit of the decade in the guise of the luxury passenger ship 'De Normandie'. Lalique had to supply more than 90 tonnes of glass designs, which provided him with an enormous amount of employment.

From 1937 onwards Laliques health went downhill as a result of advanced arthritis that increasingly deprived him of his freedom of movement.  In the same year he was also confronted with the infidelity of his third wife, Marie-Jeanne. She stays in Viroflay and Lalique returns to Paris but their relationship does not end. In 1939, with the outbreak of the Second World War, Lalique was again forced to adapt the activities at the Wingen-sur-Moder factory. This time the production comes to a standstill.  Alsace was then German and Marc Lalique, René's son, was in charge, but because he was French, he was denied access to Alsace, which was then under German rule.  Instructions were given by telephone, post and telex.

On 1 May 1945, René Lalique died. After the war, good friend Calouste Gulbenkian wrote a letter to Lalique's daughter Suzanne in which he praises his good friend and thinks that the world has become a great artist and a poorer human being who, in Gulbenkian's eyes, has not received the right amount of recognition. But Gulbenkian knows that René wanted it that way and concludes his letter with that. René Lalique is buried in the Père Lachaise cemetery in Paris together with his mother, his son Marc, daughter Georgette and his muse Alice.