From the age of five I became fascinated by René Lalique's work. My parents had quite a collection of art books. One of those books contained a vase by Lalique. A few years later I learned that it was a Bacchantes, a large vase with pictures of the companions of the wine god Bacchus. Especially the deeply worked out female figures caught my attention. It seemed as if the figures could get off the vase in no time. From that moment on I decided to dedicate a large part of my life to this artist. 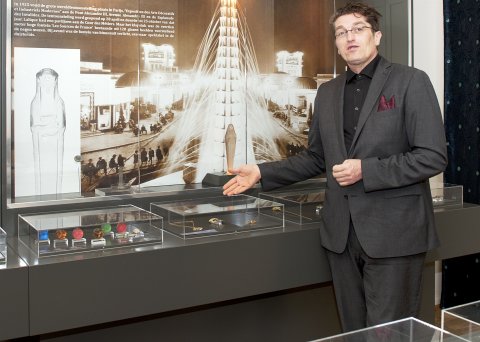 That is how I learned about the Art Nouveau period. The art movement that was not inspired by religious motives but by the devotion to nature. The inspiration within this movement did not come from worship but from devotion and respect for the nature around us in which not 'god' but 'man' is central. Here I found recognition with regard to my inner conviction that man cannot live without another. If there is a paradise on the horizon then it is here on this globe where we all have to make do.

My search for Lalique continued and I found out that this artist had exactly the same beliefs as I did. When I was thirteen I bought the first piece of Lalique. It was a powder box from 1913 - called Trois Figurines - designed for the perfume brand d'Orsay. I immediately noticed that Lalique's background as a jeweller was so clearly visible in the refinement and anatomical correctness with which the figures on the lid were modelled. I remember looking at it with my mouth open for more than an hour and saying: how wonderful you are, what a miracle!

In the footsteps of Lalique

Just before I turned sixteen, I left the parental home in Nijmegen and moved to Amsterdam. Despite the fact that it is the capital, I didn't find any great minds and because 'rising above ground level' was little appreciated in the Netherlands at the time, I decided to go to the place that I had had in mind for much longer: Paris. The city of Lalique and where it all happened. I was never afraid to be alone, not even in new places, so that was no problem.

There I came into contact with René Lalique's granddaughter, Marie-Claude. She ran the Lalique group from 1977, on the death of her father Marc. During my stay in Paris, I was able to build up a good network and I came into contact with many like-minded people. Later, I came into contact with other descendants of Lalique, including Katherine Lalique and Pierre Fauvel. Katherine is the granddaughter of Lalique from his marriage to Marie Anére. Katherine has become a good friend and through her has intensively obtained a lot of information and original documents. This also applies to Pierre Fauvel. He is the son of Marie-Louise Lalique (daughter 1910-2003 of Lalique's daughter Georgette 1888-1910). He could tell me a lot about his great-grandmother Marie-Louise Lambert. She was Lalique's first wife whom he married in 1887.

It was at that time that I started acquiring Lalique pieces of art to start a trade in them. At the end of 1988, due to circumstances, I returned to the Netherlands. The international trade in Lalique's work went well for me. However, these pieces would never return to the Netherlands because they had changed hands due to the sale. Earlier in my life I had had the idea to start a museum but until then nothing had come of it. In 1993 I decided to set up a foundation - Socété Musée Lalique Pays Bas - to preserve Laliques work in the Netherlands. This put an end to the sale of Lalique's work abroad. From then on I would only sell to Dutch collectors with the stipulation that they would have to make the purchased work available for exhibition at a considerable discount, the so-called 'loan system'.

Contrary to my expectations, it was an instant success. To give the success even more lustre, I decided to donate my entire collection to the museum that was being set up. After many moves, in 1999 I ended up with my partner in the historic Hanseatic city of Doesburg not far from Arnhem. In the large 16th century patrician house we founded an official gallery in 2003 with art nouveau, art deco silver and a large oeuvre of Laliques work. After four years we stopped selling silver and focused exclusively on the sale of the work of Lalique and some of his contemporaries. Lalique's oeuvre in our gallery includes glassware and jewellery. The loan system proved so successful that between 2003 and 2011 a shell of loan agreements arose around the permanent collection. So we decided to build a physical museum around it. On 19 June 2011, the Dutch Lalique Museum was opened with great pomp and circumstance, still modest in design at the time, but of high quality.

In the meantime, the volume of loan agreements has grown so much that we decided to resume selling Lalique's work abroad. See here our new Lalique gallery website. René Lalique attached great importance to animistic symbolism, the symbolism that stems from the experience of nature. To give you a glimpse into his world, we have added these symbolic meanings to each object.